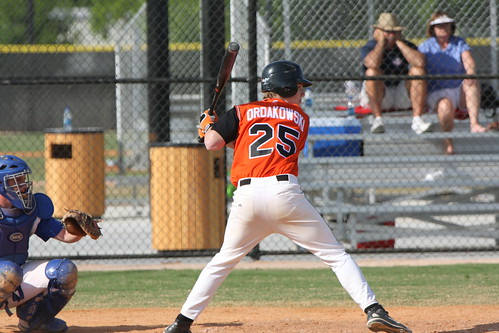 Like most sports, Baseball is a game that requires mental effort. Beyond the physical skills required at every position, the mental skills of the game are critical. Baseball is a game of demanding strategic, tactical and technical features that can be, and should be practiced on a daily schedule. This article discusses the essential ingredients to the pre-at bat routine recommended for baseball players as they address the particular situation, circumstances, strengths and weaknesses of their opponent – as well as – their own capabilities.

Why the Pre-At Bat Routine?

Routines are used in many sports to build consistency, channel the athlete’s focus, and put them in the optimal physical and mental state of readiness. Routines are commonly customized and they are well known for use amongst both pitchers and batters. Pitchers develop the most sophisticated pre-performance routines in baseball. Their routines are dependent on a host of factors including their rhythm, feel, accuracy, type of pitch called for, the specific batter at-the-plate, their catcher’s strengths and weaknesses, and options with respect to the playing situation and game conditions.  However, every athlete on the field will employ some kind of pre-pitch routine, especially as they advance to higher levels of play.

Infielders employ a routine that has specialized applications to their position, fielding situation, and plays directed by their coach or manager. Outfielders employ routines that are slightly more generalized, but include reading the field, batters, and base runners. Batters can develop a pre-at bat routine that helps them focus on what hitting situation is, what brings them confidence, and how to put them selves in the optimal performance state at-bat. This specific article will be the first of a series of pre-pitch routines and it will focus on a pre-at bat routine for hitters.

Who designs the Pre-At Bat Routine?

Pre-at bat routines are frequently designed for each player by a sport psychology consultant. They examine each player’s motivations, what brings them confidence, and those past experiences that have brought them success. Certain steps go into the development of each batters routine:

Customized routines favor positive messages and images to harness the intrinsic focus, creativity, confidence, motivation and over-all success of each batter. When coaching these athletes on the pre-at bat routine, the coach or consultant should be flexible, encourage frequent practice and encourage creativity in developing the routine.

Structuring the Development of Routines for Successful Hitters

One of the most important stages in the pre-pitch routine comes at a time when it is easiest to become distracted or residual thoughts from the field might preoccupy the batter in the hole. Being in the hole should be seen as the FIRST STEP to employing the specific routine designed to help each batter channel his focus sequentially, putting himself in-the-zone for a successful at bat. Each batters routine will incorporate their unique process of focusing on the situation (situational outlook), the implanting of positive thoughts in his mind (cue word utilization), and activating his state of readiness to be successful at the plate (resonating moment).

From a consultant’s point of view, each athlete is likely to have situational outlooks that may be either helpful or distracting. It is quite possible that different batters will have specific situational outlooks that will lead them to greater focus and enhance their motivation to perform their best. The coach should not create a rigid framework for pre-pitch routine stages, but rather guide each player to discover what helps them the most.

Cue word utilization incorporates techniques such as Imagery, Positive Self Talk, and Positive Visualization. After the batter has visually scanned the field and developed a positive situational outlook, he should now plant a cue word in his brain that will drive his sense of confidence and strength.

Cue words that evoke a relaxation response are not suggested for a batter and have been shown to be counter productive to success at higher levels of competition. Positive cue words in this situation often have a mind/body component attached to them. Words such as “strength”, “power”, “confidence”, “sweet spot”, “drive it”, “be a badass”, “in the zone”, all connote some form of feeling recollection.

It is recommended that the cue words come from the player himself and should not be given to him. It may seem immature, unnecessary, or even distracting to a coach or consultant, but successful examples of cue words developed by players have included: “destroyer”, “big daddy”, “donuts”,and even “dirty dirty”.

To each his own, cue words are meant to be intrinsically empowering. Although the consultant and coach may introduce these ideas to the athletes, the players must be the ones to develop them and harness their potential.

The Resonating Moment is defined as a clear example of the “flow state” applied to the specific demands in batting. Mihaly Csikszentmihaly (Flow: The Psychology of Optimal Experience – 1990) has defined the two criteria necessary for achieving the peak performance zone:

1) That an individual has a very focused understanding as to the demands of the task they are challenged by, and

2) That the individual has a clear sense of their skills sets which match those same demands.

If the athlete does not adequately understand the challenge, they are likely to underestimate or ineffectively focus on the task, or their applying the necessary skills to be successful.  Not only does the Resonating Moment summarize how the athlete perceives the situation – but how they recall their training, experience, practice, and execution of the skills required. In the hole, on deck, and at the plate each athlete is called upon to envision success, recall a situation in his past (while in the “flow state”) and proficiently accomplished the task. Just the thought of a future success or recollection of a previous achievement is empowering for an athlete, and these feelings reengage the sensations of that experience. Hence, some athletes sense the flow, some get pumped up, and in their own way become successful.

A.) Situational Outlook – updating any changes from the previous batter visually scanning the field and determining their primary task…location of base runners, how the pitcher looks from a new angle…and mentally reengaging the routine.

B.) Cue Word Utilization – he should now plant a cue word in his brain that will drive a sense of confidence and strength in him…now even more focused than before.

C.) The Resonating Moment – visualizing success by utilizing an image or picture of the movement forthcoming – the mental cue word recalled – and Resonating Moment that fluidly achieves the desired positive mind/body state and flow.

When properly executed this routine should result in empowering feelings and emotions that recall successes at the plate…especially those that most closely approximate the situational outlook. Now the hitter should be primed and ready to go up to the plate with focus, confidence, and empowering positive emotions.

This article presents a simple, structured routine to be employed while in the hole, on deck, and at the plate – allowing the batter to become more focused, prepare for the situation at hand, become attuned to words, feelings and actions that build confidence and an empowering mind set…and finally…acclimate toward the flow state before taking the first pitch.

Our primary goal in presenting this information is to help build consistency. By definition, consistency refers to the achievement of a level of performance that does not vary over time. That being said, one way an athlete can achieve consistency at the plate is if he develops and consistently executes the same pre-at bat routine before every chance to hit. While in the hole, while on deck, and while at the plate, the batter can always be working towards achieving the flow state. So let’s get focused, get confident, and get empowered at every stage!

Philip Del Vecchio III, B.A. is a Sport and Performance Mental Skills Consultant and is currently finishing his Masters Degree in Sport and Performance Psychology at The University of Denver. Philip plans to attend Doctoral School in the fall of 2009 and intends to contribute to literature in the emerging field of Positive Psychology by applying his philosophical orientation towards teams and organizations. In 2006 Philip earned his B.A. in Psychology from the University of Colorado at Boulder. Philip graduated high school in 2002 and has since been involved coaching and consulting baseball teams at the youth, high school, and collegiate club levels in the Colorado, Front Range area. Most of his work with baseball has been specialized in the areas of pitching and mental skills development. As a pitcher himself, Philip played on a 5A Conference Championship team at Longmont High School, was awarded all conference and all state honors, and led his team with a record of 10-1 as a starting pitcher during his final season. After being offered opportunities to pitch with Junior College Teams, Division I College Teams, and an MLB Development Team, Philip chose to pursue a career in academics and currently dedicates himself to helping athletes realize their potential through positive motivational sport psychology techniques.  You may contact Phil from his web site:  www.tripleplayconsultant.com

Stephen E. Walker, Ph.D. – In the field of sport and performance psychology, Stephen Walker began his work at the Human Performance Laboratory at the University of Colorado and for 19 years worked to develop the use of mental conditioning skills with athletes from the CU Golf, Track & Field and Cross Country teams. He has interviewed many of the world’s finest athletes (both professional and Olympic), and worked with accomplished athletes at many different levels of sport. These include little leaguers to seasoned professionals recognized world wide. He particularly enjoys helping to support both the parents and their promising young athletes as they strive to realize their potential. His innovative program called Brain Tough™ focuses each athlete on developing the reps and sets for skills essential to achieving competence and mastery in mental conditioning. He has trained with and studied elite coaches and sport psychologists over the past several years culminating in his role as Editor-in-Chief of Podium Sports Journal: The Journal of Mental Conditioning available at www.PodiumSportsJournal.com. Outside of his consulting work, Dr. Walker is an accomplished public speaker and facilitator of clinics. Contact information: [email protected] Web site: www.drstephenwalker.com