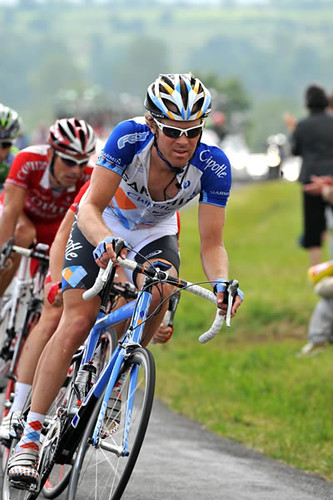 Podium’s Podcast of the Week Features an Interview with elite cyclist Will Frischkorn:

Will Frischkorn is one of those unassuming types that hang out in Boulder – a lot like your friend and neighbor his friendly yet calm exterior belies an aggressive cyclist who’s development has landed him on perhaps the most progressive and forward thinking cycling team on Planet Earth.  Garmin-Slipstream is out to put an end to discussions of cheating and doping by employing a very aggressive and proactive regimen of testing likely to rival something USADA might use to keep athletes clean, healthy and yet performing to their optimum.

Will is coached by Jonathan Vaughters, Slipstream’s brainchild and director, and credits the man for teaching him how to train with balance, a positive attitude, patience and a good deal of fun.  Last year Will participated in his inaugural Tour de France.  He learned first hand how grueling the race can be and how one bad day has the potential to hurt for a long time.  Thanks to a strong team, a great director and a supportive cast – Will is here to stay and make the most of his opportunity on the Garmin-Slipstream team.  Will he make the team again?

Enjoy Podium’s interview with Will Frischkorn as he and Team Garmin-Slipstream prepare for the Tour de France 2009.  Shortly after this post was originally written – Team Garmin-Slipstream announced its top nine riders for this year’s Tour de France.  Unfortunately, Will missed the cut and will have to watch with the support staff along with Tom Danielson, another Tour de France veteran who is missing out on this year’s race.  Both riders boast strong credentials, but their being left off Vaughter’s starting squad says more about Slipstream’s incredibly talented crew than either racer’s poor performance.  Either would serve an integral role with many of the other teams racing the Tour.

So take a listen to our interview with Will Frischkorn after being named to the Garmin-Slipstream team.  He was optimistic and excited about the team’s prospects.

I’m confident he didn’t anticipate the incredible development of  David Martin,  the Irish Champ and nephew of  legend Stephen Roche.  Also, missing the cut is Canadian Champion Svein Tuft.  Vaughter’s team is deep too with British sprinter David Millar and Tour journeymen David Zabriskie, Christian Vande Velde and Bradley Wiggins.  While your at it – take a listen to Podium’s interview with Tom Danielson after his first Tour de France with Team Discovery: