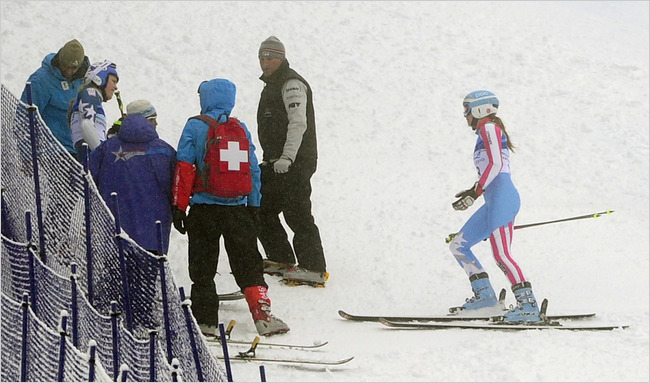 In a previous article involving a “From the Field” interview with Dr. Stephen Walker, Podium Sports Journal answered several questions with respect to the mental conditioning these great athletes engage in prior to their competition performance.  Those questions focused on preparation under the best conditions.  However, the Women’s Giant Slalom event placed these great athletes in extraordinary circumstances.  Read on…..

The second run of the Vancouver Olympics Giant Slalom was run yesterday in conditions much improved over Wednesday’s fog, poor visibility and snow flurries.  In Part 1 of this article – we featured the trials and tribulations of the event’s defending Champion, Julia Mancuso, whose day included an aborted run, the death of her skiing buddy and friend, and innumerable other distractions that left her in 18th position when the event was suspended by Olympic officials.  We outlined WHAT she would need to do to recover from the debacle – and – suggested HOW Mancuso might do just that.  Not only did Mancuso recover, but she posted the 3rd best run of the day climbing 10 spots to finish in 8th place.

Adding to what was an already difficult day she found herself in the midst of a media frenzy over her purported feud with Lindsey Vonn – whom she allegedly blamed for her aborted run.  Vonn is America’s most decorated skier on the women’s team and long time rival on the tour.  Vonn had crashed on the course just as Mancuso took off from the start, but got tangled up in the netting and couldn’t get off the course in time for Mancuso to get a clean run.  “You know it’s really not her fault, of course.  Like I said before, the fact that the whole thing came across the media like an attention fight is just ridiculous.”

For her run on Thursday, the foremost difficulty Mancuso had to overcome came in the form of grief.  The loss of her good friend and Squaw skiing buddy CR Johnson was huge.  He was fatally injured in a crash on a run the two of them had skiied many times.  Johnson was no stranger to injury and had suffered a serious traumatic brain injury in 2005.  Mancuso was reminded of how he battled back from his head injury and returned to the mountains as quickly as he could.

“Just hearing the news and knowing …how much he loved skiing and being able to… overcome those battles, coming here today for me and after everything yesterday was just, like, go out there and love skiing, the way CR did,” Mancuso said, with her voice cracking with emotion.  She dedicated the run to Johnson.

The simplicity of Julia Mancuso’s goal can not be understated.  She decided to go out there and LOVE SKIING.  No expectation, no pretense, no pressure, completely in the “now” moment with her friend on her shoulder as she powered through her run.  Yeah Julia.  Mancuso ends her Olympic Games with two Silver Medals in the Downhill and Super Combined.  To learn more about CRJohnson, read about him in FreeSkier.com.

One thought on “Sport Psychology at the Vancouver Olympic Games 2010”