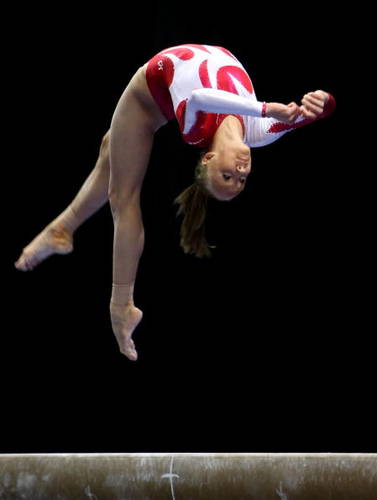 It is well known what hard work, skill level and physical ability it takes to succeed in competitive gymnastics. In order to thrive at a high skill level, gymnasts need to practice repeatedly, continuously condition their muscles, and progress in movements and skills that are unnatural and must be learned and practiced over a long period of time. What is not as familiar are factors that contribute to the psychological challenges in gymnastics including performance anxiety, past injury, fear of injury, negative imagery, and social factors (Smith, 2017). Performance anxiety is the anxiety, fear, or persistent phobia which may be aroused in an individual by the requirement to perform in front of an audience, whether actually or potentially. The competitive sport of women’s gymnastics can be mentally and physically demanding on the athlete. The difficulty of the skills being performed and the high intensity of training for higher level athletes indicates the risk being taken by the gymnast and the rise of injuries in the sport (Caine, Lindner, Mandelbaum, and Sands, 1996; Kerr and Minden, 1988). The prevalence of injury, or even the perception of risk of injury can lead to a gymnast’s fear of being impaired while competing and/or learning a new skill. Fear of injury can produce harmful influences on a gymnast’s performance and self-confidence in gymnastics.

Sport psychology research has continued to find that fear of injury is a common source of worry and a possible reason for leaving competition among young gymnasts (Duda, 1995; Duda and Gano-Overway, 19986; Klint and Weiss, 1986; Weiss, Weise, and Klint, 1989). According to Scott Goldman, a licensed psychologist who works with athletes, it is common for this population to experience anxiety that has affected their personal lives, academic efforts, and athletic performance. The National Collegiate Athletic Association (NCAA) research shows that almost 85 percent of certified athletic trainers believe anxiety disorders are currently an issue with student-athletes on their campus (Goldman 2014). A standardized way of addressing this issue is using psychological skills training (PST). PST is an educational program and systematically training of mental skills designed to develop cognitive strategies in combination with physical skill development to enhance gymnastics performance and one’s overall experience in the sport (Weiss, 1991).

The fear of injury exists when a gymnast lacks confidence in their ability to perform successfully in a threatening situation (Magyar, 1996). These threatening situations could be competing a new skill in front of an audience for the first time, attempting a new skill with no spotting from a coach, or trying a skill that has been practiced with mats as a safety net without the mats for the first time. Events such as balance beam and uneven bars leave gymnasts in an especially threatening situation if timing or mindfulness is not up to par. In order to perform at high competitive levels, one must learn to exercise control over fearful situations. A successful strategy is to adopt self-enhancing perspectives rather than self-defeating ones in order to overcome the fear of injury. Self enhancement is a desire to magnify positive aspects of self-conceptions while distancing oneself from negative feedback and information (Cap 2016).

This process of self enhancement can be heightened by adopting psychological strategies such as thought stopping, imagery/relaxation, and positive self-talk (Magyar, 1996). These processes have been shown to have both positive and negative effects in treating anxiety in non-athletes, but has had more positive results with competitive gymnasts specifically struggling with performance anxiety. Thought blocking & thought stopping are techniques used in cognitive behavioral therapy (CBT) to help reduce or eliminate any self-defeating thinking. (Thought Blocking & Thought Stopping, 2017). Thought stopping can be used in a competitive gymnastics setting with the help of a coach or sports psychologist putting the athlete in the environment that brings on anxiety. The athlete would verbalize their thoughts while in this setting, and every time the negative thoughts are said the partner yells “Stop” accompanied by a clap. Taking a video and discussing the negative thoughts will also help with coaching and replacing these thoughts with “I am in control of my own thoughts” repeatedly. Thought-stopping requires practice and being intuitive with negative thinking as well as rejecting the negative thoughts when they come up, with relaxation and changing normal routine activities and thoughts that accompany the anxiety.

In a study by Carr in 2006, the relationship between focus and optimal performance were explored. Carr identified positive self-talk as one technique that can enhance competitive focus. He defines self-talk as the conscious and subconscious dialog that occurs in your mind before, during, and after competition. Self-talk affects confidence and emotions, which impact performance (Carr, 2006). Imagery, goal-setting, self-talk and physical relaxation techniques are named as the four basic mental techniques predominantly used in sport psychology interventions, supplemented with Psychological Skills Training (Vealey, 2007). Research on elite athletes shows that most successful athletes differ from less successful ones because they have better concentration, higher confidence, more task-oriented thoughts, lower anxiety, more positive thoughts and images, and more determination or commitment. Changing negative unhealthy thinking into positive self- talk custom to the athlete’s personal values and struggles requires repetition and willingness in order to adapt this reprogramming in the brain. When using these approaches, the athlete learns to focus on relevant information, such as feeling relaxed and giving their best, rather than worrying about the possibility of being injured or poor performance. Not only do these strategies improve concentration, but they may give the athlete a leverage in controlling their fears and increase self-confidence towards performing difficult skills. These strategies have been shown to be effective in performance enhancement programs (Orlick, 1986) and can be developed in young children and adolescents (Weiss, 1991).

A study administered by Tremayne in 1990 investigated cardiac and electrodermal responses relating to sweating through the skin by the sympathetic nervous system, in competitive gymnasts differing in levels of trait anxiety and repression. The research strategy was to seek differences in tonic, sensory input that adapts slowly to a stimulus, and phasic sensory input that adapts rapidly to a stimulus. Physiological measures were taken that occurred in association with differences in state and/or trait anxiety levels. The outcome established a number of psychophysiological differences between groups differing on state and trait anxiety. Results from this study suggest that high anxiety and low repression (forcing dangerous thoughts to the unconscious) may be a relatively common personality trait among gymnasts (Tremayne 1990).

Additionally, in 1996 Magyar studied a sample of 11 competitive gymnasts who trained at the USA Gymnastics Junior Olympic Program 4–6 days a week. The population sample had participated in a performance enhancement educational program with exposure to Psychological Skills Training for one to four years. This study revealed that, after being interviewed each independently, the gymnasts used a variety of psychological strategies to overcome their fears of being injured. Based on these findings, it seems that if a gymnast wants to overcome the fear of being injured, it would be beneficial to learn how to use psychological skills (Magyar, 1996).

Given the difficulties faced by gymnasts in the realization of complex skills, and the increase of demands, the gymnasts must practice and repeat the basic elements of their routines thousands of times under conditions of high intensity. Elite gymnasts train thoroughly to reach high competitive performances. These athletes are exposed to high levels of psychological stress and intense physical training. The findings of the study done by Nassib in 2017 showed that the score levels for cognitive and somatic symptoms of anxiety were significantly higher for competition situations than for training situations, whereas participants reported the same level of self-confidence during the two sessions. This study goes on to show that using the mental training to control negative emotions could be beneficial for performance. Reducing pre-competitive anxiety should be of prime importance if coaches want to optimize their individual athlete’s performance (Nassib 2017).

Simone Biles, an American Olympian gymnast with a combined total of nineteen Olympic and World Championship medals was, in her early competitive years, struggling with anxiety and low confidence. Biles struggled so much in a U.S Championship gymnastics meet that she was pulled out before completing the competition. Shortly after, she sought the professional assistance of a sports psychologist who vastly improved her mental blocks and helped her to succeed (Zaccardi, 2016). After working with Robert Andrews, her sport psychologist, Biles was able to commit to physical, technical, and mental excellence. Many athletes ignore the mental aspects of the sport because of the fear of being perceived as “mentally weak” when seeking help (Cohn, 2016). The stigma of mental illness goes into the field of athleticism given the false feeling vulnerability and weakness in a setting of judgement and competition. Biles was told “Only crazy people go to see [a sports psychologist]” signifying the shame attached to seeking mental health consulting. Part of Andrews’ Psychological Skills Training involves breathing techniques, being mindful of the control the athlete has over their own response, and improvement of a support system (Roenigk, 2016).

In order to improve and optimize athletic performance for competitive gymnasts it would be beneficial to implement psychological skills training in practice and use in competition. It would be useful to research and expand studies on PST for future competitors. The role and utilization of sport psychologists working alongside coaches would aid in ideal performance and success. PST will specifically utilize performance for gymnasts with performance anxiety, fear of injury and low self confidence.

Positive Self Talk. (n.d.). from http://www.sound-mind.org/positive-self-talk.html#.Wfu4HNWnHIU

Jackie was formerly a recreational and competitive gymnast, focusing on uneven bars. She currently teaches gymnastics classes and private lessons by request on the side of her full time job, as a research assistant working in cognitive rehabilitation research with individuals who have neurological disorders and traumatic brain injuries. While in her undergraduate psychology coursework she became interested in sport psychology and hopes to further explore the field and help other athletes.