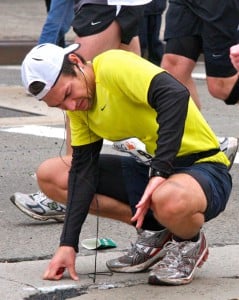 Our next requisite is often referred to as managing discomfort, but in the world of endurance athletes its more commonly known as “Pain Tolerance,” or the ability to withstand discomfort.

Julius Caesar once said, “It is easier to find men who will volunteer to die, than to find those who are willing to endure pain with patience.”

Think about how and why pain tolerance is incredibly hard to find, and that as a skill, it is hugely valuable to endurance athletes in many sports.

Think about that the next time you are dealing with discomfort. Then think about how much of an advantage you will have over your competition when you develop this ability.

John O’Sullivan, a former professional soccer player now working in youth sport, puts it in a different way. Parents often ask him if their child has what it takes to become a college athlete, or even a professional athlete. This is his answer…

“How much are your kids willing to suffer?” (https://changingthegameproject.com/more-important-than-talent/)

In other words, the ability to withstand pain is more important than talent. Maybe this is a skill worth developing.

Angela Duckworth, a researcher at the University of Pennsylvania has created a body of work which was awarded the MacArthur Fellowship in 2013, also known as the Genius award. She earned this fellowship for her studies on GRIT.  Much of her research can be found in her book: GRIT: The Power of Passion and Perseverance (2018).

One of her studies was done to figure out the factors that best predicted success at West Point military academy. She wanted to know why certain cadets succeeded and others dropped out. What was the greatest predictor of success?

Was it Physical strength or athletic ability? No

Was it IQ or intelligence? No

The greatest predictor of success was something called ‘Grit’: Defined as “perseverance and passion for long-term goals.”

How can we increase pain tolerance?

There are two ideas that I will briefly talk about that can help with your pain tolerance. The first is a concept called ‘defusion.’

Defusion is a technique that enables you in relating to your thoughts and feelings differently.

Separating those thoughts and feelings from “who you are” reminds you of the fact that these sensations of discomfort will pass.

One of the useful characteristics of the “defusion” technique is that it enables us to alter our self-talk in more productive ways. For example, if you were to have the thought “I am a failure”, it does not mean that you are a failure, it only means that you had that thought, and that thought is likely to pass in short order. By “labeling” the thought as such, it enables us to create a space in our thought process to alter our self-talk in more productive ways. This also illustrates another mental skill.

The idea is still there but suddenly the thought loses a lot of its power over you. It no longer seems as severe. In addition, the realization that these thoughts are short lived gives them less traction to command our attention.

If you find that you are telling yourself a painful or uncomfortable story often you can give the story a name. When you notice yourself telling that story you can just say, “I’m telling myself the failure story again.” Or whatever they story may be. Developing this skill makes it easier to deal with being uncomfortable.

Think of defusion as the opposite of fusion. Fusion is when two things are fused together and join. Defusion is when you separate two things. By employing this technique, your discomfort suddenly becomes just part of your experience and not your entire experience.

Another skill designed to enable us to manage discomfort more effectively is called ‘Expansion’. Expansion is allowing room for unpleasant feelings to exist and understanding that those feelings themselves do not necessarily define you. This is the opposite of suppressing or avoiding a feeling.

Often people feel that they “have to suppress” any sort of unpleasantness. We have feelings for a reason and by suppressing a feeling that we deem bad we are not allowing that feeling to serve us.

If a loved one passes away, we are expected to mourn; it would be unhealthy to pretend nothing is wrong. It is Okay to have unpleasant thoughts and feelings. We cannot realistically live in perpetual happiness.

You can think of expansion as acceptance. The easiest way to allow for expansion is to breathe into an unpleasant feeling and give it space to exist. More than likely it will pass sooner than if you suppress it.  Again, it will not hold as much power over you. You can think of it as being able to be comfortable in discomfort.

In the Navy SEALs training, and a motto in the Marine Corp is “embrace the suck.” I have known athletes that looked forward to this part of their competition or training.

If you have a Growth Mindset, motivation, and commitment, but do not have a pain tolerance, you will still have difficulty with obstacles. They may have the ability to slow you down.

Okay, so let’s say we have these four things. What is next?