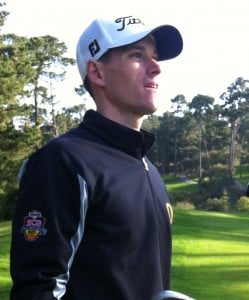 All competitive players recognize negative self-thoughts. It starts with that devilish little voice in our head which raises doubts, fears and questions about our ability to perform. The little voice usually comes during the most pressure-packed times in a match.  It’s that voice that says “I suck, I’m pathetic” after a missed approach shot, or “How could you do that again?” after another wide backhand.  It’s that cynical little voice that whispers “If you double fault again, you’re going to lose thismatch,” or “I wonder what my friends and parents are thinking now” after you flub and easy overhead.  Negative self-thoughts precede negative self-talk, and without the proper awareness, can bring even the most competitive player down.

When a player chooses to listen to their negative self-thoughts and begins self-talk, that’s when the downward spiral usually begins. It often looks something like this: a player misses a ball which they expected to hit without fail, and in their head the little voice of doubt enters and begins chiming in.  Simultaneously, their body starts to get tight.  Instead of moving to the next point, stepping away from the line, or any other form of refocusing, the verbal self-talk begins and the player continues to harp on the past, verbally berating themselves.  All this leads to tight muscles, loss of feel, and further errors.

What’s important to understand is that we have a choice regarding whether to react or respond to our negative self-thoughts.  When we react to this devilish little voice with defensiveness and deny its existence, the voice gets louder and louder.  There is a saying – “What you resist persists.” In other words, by trying to deny this voice or feeling, it only wants to be heard evenmore.  It’s also important to understand that just because you conjured up this negative self-thought doesn’tmean that thought is true.  Have you ever been in a heated argument with a friend or family member, had a negative self-thought like “I can’t stand them!” only to let it go moments later?   This is because you accepted this thought, not as true or false, or as a validation of anything, but just non-judgmentally accepted that this came up.  As a result, it just faded away.

Be aware, and watch it dissolve away:

The problem is not the self-thoughts – those are normal. Don’t resist it, or fight with it.  Instead, simply understand that it’s a byproduct of being in a high pressure situation. With awareness of the self-thoughts, take a step back, bring your attention to your breath, and visualize the self-thoughts being released with your exhale, or separating like a cloud.

Say “hello” to the self-thoughts – by acknowledging them, you normalize them.  You can actually say to these self thoughts “Hey, thanks for sharing your concerns, but I’m in the middle of a match, go back to the bleachers.”  You might also pretend that your favorite comedian (I like Chris Rock), is mimicking this reply, which may bring humor to the situation.

Put a time lid on it:

Here again, the concept of acceptance comes through.  If you find yourself muttering “I stink” after a shot or game, rephrase that by saying “I stunk on that shot” or “That was one bad game.”  Even after a match, many times a kid will come off the court sullen and saying “I suck.”   While ideally the young player would not feel this way to begin with, a realistic yet far healthier approach would be “I sucked today, but tomorrow is another day.”

Look at it another way:

Imagine that you have earned match point, and you’re ready to serve.  The thought comes up “Uh oh, I’m so nervous.”  Ask yourself: “What’s another way of looking at this?”  How about considering the opportunity to hit a great serve to win the match?  Instead of dwelling on the obstacles associated with our nerves, we can shift attention to the process that entails what we must do to overcome them.

You hear those self-thoughts; they are coming at the rate of a landslide and speed of a tornado. This is the time to change your focus. Bring your attention to your strings and just be curious. This 15 second distraction is usually enough to help you calm down and regain your concentration.

The towel is a great reason and excuse to take a moment to regroup.  It provides a break from the action, and a time to just let go.  Today’s players are always being followed by a ball boy with a towel in their hand, and it isn’t just to mop up sweat!

In summary, we all have negative self-thoughts, yet when you sense them escalating to self-talk, you need regain control of the situation.  The best players in the world have doubts, fears, and get nervous, just like us.  It happens to everyone.  The question becomes – how you will respond, play through it, and avoid the negative spiral downward.  When in doubt, go back to the six practices when working with self-thoughts.

Rob Polishook, MA, CPC is a Sport Psychology and Performance Coach. He is the founder and director of Inside the Zone Sports Performance Group. He works with athletes and teams at the middle school, high school, national, college and professional levels. His work focuses on helping athletes and teams gain the mental edge, often the difference between winning and losing. Rob has spoken to athletes, coaches, parents both nationally at USTA, USPTA, ITA conferences and internationally conducted workshops and worked with top ranked juniors in India, Israel, Switzerland and the Czech Republic. He was awarded the 2008 USPTA – Eastern Division High School Coach of the Year award.  Additionally he has published articles in national publications including USTA and USPTA publications. Rob can be contacted about his private or team consultation at 973-723-0314, [email protected], www.insidethezone.com.